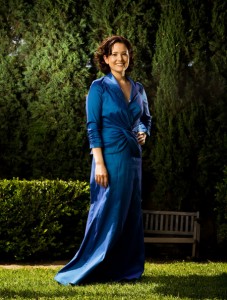 Marisa De Silva is a soprano, voice teacher, and Certified Teacher of the Alexander Technique. As a singer she has performed in numerous festivals in Europe and in Asia as well as throughout North America. In addition to the operatic repertoire, Ms. De Silva has distinguished herself particularly in the field of early music performance practice and art song repertoires of Spain, Japan, Ibero-America, and new music.

Ms. De Silva is a dedicated recitalist and has continued her studies in furthering her repertoires interpretation. She has studied and performed with composers, Jake Heggie, John Harbison and with pianist, Martin Katz. She also spent two summers in Spain where she studied with Teresa Berganza and pianist, Miguel Zanetti as well as guitarist, Jose Maria Gallardo del Rey. In Granada she performed recitals at the prestigious Auditorio Manuel de Falla Concert Hall and El Ladrón d’agua. After performing as a Young Artist at the Sugar Creek Festival in Illinois where she sang with Metropolitan Opera conductor, John Keenan, her interest in Spanish and Ibero-American music grew stronger, which led her to travel to Barcelona, Spain, where she studied and performed works of Catalan and South American composers. She studied Catalan repertoire with Catalan singer, Marisa Martins, Latin American repertoire with Patricia Caicedo, and Brazilian repertoire with Dr. Stela Brandão. In Barcelona she sang in two recitals at the historic Ateneu Barcelona. She has also been invited by the Tuscia Opera Festival in Tuscia, Italy, as the soprano soloist for the festival’s Exultate Jubilate concert series. She also holds recitals in Japan frequently where her first album, “Marisa” became available in 2013 with much success. Most recently, she was invited by the Joe Hisaishi Symphonic Concerts at Microsoft Theater in Los Angeles and Carnegie Hall in New York to serve as soprano soloist. She is a member of the Screen Actors Guild (SAG-AFTRA) and works on recording projects and session work as well as recitals.

In recent years her interest in early music grew stronger and she is currently pursuing a DMA in Early Music Voice at the University of Southern California Thornton School of Music under the direction of Adam Gilbert. She is the recipient of the Colburn Foundation Scholarship in Early Music. She has recently been invited to the American Bach Soloists Festival and sang as soprano soloist in their annual performance of Bach’s Mass in B Minor under the baton of Jeffrey Thomas. She also served as member of the scuola cantorum in Boston Camerata’s production of “a Medieval Christmas.” She has been a member of the Thornton Collegium Ensemble and Baroque Sinfonia in which she was featured soloist at the Boston and Berkeley Early Music Festivals.

In her doctoral studies she minored in opera directing under the tutelage of Ken Cazan. As an opera director, she has directed Loyola Marymount University’s Sinatra Opera Workshop production of Old Maid and the Thief, University of Southern California’s Chamber Opera production of Speed Dating Tonight, and served as Assistant Director for the USC School of Dramatic Arts’ production of West Side Story.

Ms. De Silva earned her Master’s and Bachelor’s Degrees in Vocal Performance from Illinois State University, where she was given numerous honors for her singing and academic achievements.