The return of Charles II and the monarchy brought a resurgence of pomp, pageantry and the salacious to Restoration England, which is expressed in music by Jenkins, Locke, Lawes, Humfrey, and Purcell.

Joining in a recital of Paulina Francisco to sing songs from the late Renaissance with special attention to the Concerto delle donne of Ferrara.

Music for Harp, Voice, and Flute

Repertoires include 8 Folk Songs for High Voice and Harp’ by Benjamin Britten and Federico’s Songs For Children’ by George Crumb
With harpist Linda-Rose Hembreiker and flutist Stephanie Getz.

Boston Camerata with the Da Camera Society “A Medieval Christmas”

A Collaboration with harpsichordist, Robert Blake and Baroque cellist, Marylin Winkle visiting the works by Italian female composers from the early Baroque period. Selections include songs by Francesca Cachini, Barbara Strozzi, and Chiara Maria Cozzolani among others.

A charity event sponsored by NGO, ANNIE FUND in Japan. All the proceeds will go to building a school in Pune, India. 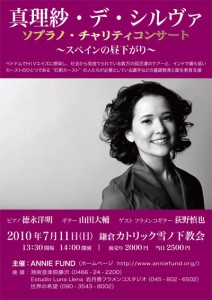